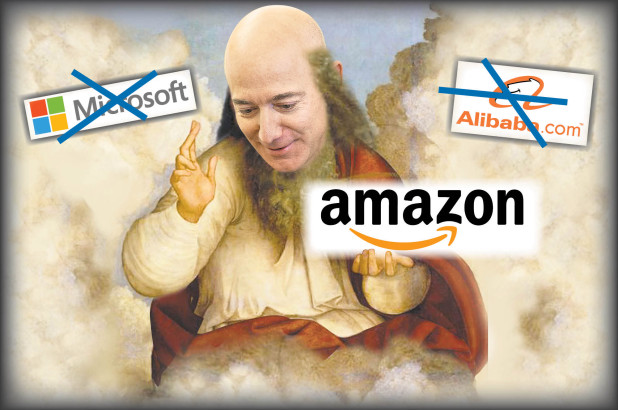 Online retailing giant Amazon has a new strategy for dealing with threats to its cash-cow cloud business: Pretend they don’t exist.

At the Seattle-based company’s annual conference to promote its cloud business in New York in July, the tech giant imposed restrictive new rules on participating companies by forbidding them to talk about the competition, The Post has learned.

Companies with booths at the event who dared to name Amazon’s cloud competitors, like Microsoft or Alibaba, had to either remove the offending language or see it covered up with tape, sources told The Post.

It’s not just the names of the competition that got scrubbed. Amazon also banned any language suggesting Amazon’s cloud business isn’t the only digital data storage provider in town by barring phrases such as “multi-cloud,” “any cloud,” or “every cloud,” according to sources and marketing guidelines obtained by The Post.

“They reviewed everything that will be shown at our booth in terms of any PowerPoints, any presentations, any demos, even swag,” one attendee of the Javits Convention Center conference said.

Amazon reviewed the designs for all the swag items, including giveaway mugs, ball caps and T-shirts, ahead of the conference — and then again when the vendor arrived at the Javits Center to prepare the booth, the attendee said.

When an Amazon inspector discovered references to other cloud providers in the attendee’s slide show, the inspector demanded they be changed “on the spot,” the source said. “And then they came back an hour later to make sure it was gone.”

Another source witnessed summit workers going around the show floor and placing tape over mentions of other cloud providers on booth materials and posters.

The crackdown comes as the e-commerce giant faces growing competition to its cloud business, Amazon Web Services, or AWS, which sells its computer-processing power to government agencies and major companies, such as video-streaming service Netflix and digital scrapbook Pinterest.

Since starting AWS as a side business in 2006, it has grown to be the biggest cloud provider on the planet — and a major source of revenue for Amazon. Amazon’s cloud business currently contributes to more than half of the larger company’s profits, helping to support founder Jeff Bezos’money-losing delivery business.

But growth is slowing. Revenue grew just 34.7 percent in the past quarter — a dip from the previous quarter’s 37 percent clip.

Rivals, meanwhile, are chipping away, with Alibaba’s Aliyun and Microsoft’s Azure growing steadily in popularity. Microsoft last month beat out Amazon to secure a $10 billion Pentagon contract to power the Defense Department’s cloud, a significant coup for the Windows-maker and a blow for Amazon.

“They think they can police it by not showing people what’s going on. But it’s too late to put the genie back in the bottle,” Holger Mueller, principal analyst at Constellation Research, told The Post.

Wedbush analyst Dan Ives pointed to Microsoft’s recent win of the Pentagon contract as fueling Amazon’s insecurity about the longevity of its dominant position in the cloud.

“As we get into this next phase of cloud, it’s going to be a lot more competitive,” Ives said. “In a multiple cloud environment, that’s not a positive for Bezos and Amazon.”